In the open and spacious setting of the Veritas Institute in Madrid, Spain, the 30th anniversary party of InteRed was held on 6 November.

The warm sunny day facilitated the party programme. It started early and had several outdoor components: games for the little ones, sports for the young people, a photo exhibition in the entrance hall, etc.

After some words of greeting by Ana Mª Bueno, principal of the school, Carmen Lizárraga, vice-president of the TA and president of the InteRed board of trustees, introduced the event. She thanked the many people involved in the projects over the past three decades and the road they had travelled together assisting in the mission of the Teresian Association.

Ana Arancibia, executive director of InteRed, presented the background to the origins of this NGDO which was founded in Madrid in 1992. She highlighted the priority areas for action that have been maintained over the years: transformative education; the struggle for equality on behalf of girls and women; raising awareness by means of study and volunteer training to address the structural causes of the inequalities and violence that are experienced in many settings. 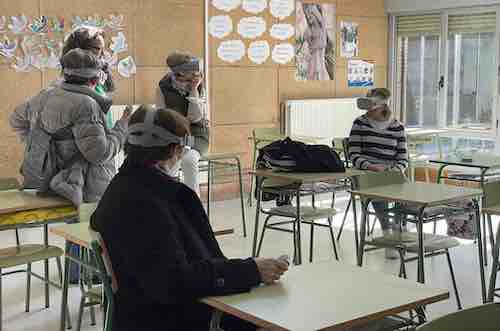 Then a video was shown about how some of these people have gained access to essential learning for a dignified life thanks to the work of InteRed. The importance of networking and collaboration with institutions and companies was also stressed, and this is something that this NGDO has promoted since its inception.

As challenges for the present, she mentioned the need to counter disinformation −there is currently an InteRed campaign in this regard− and to recover our connection with nature and care for the environment, especially in the most impoverished countries that have been hit by natural disasters.

At the end of this part, Mateo, a pupil from the centre, played a couple of pieces on the cello, showing his virtuosity and also his solidarity.

The day continued with activities for all ages facilitated by volunteers in the large space at the Veritas School. The youngest children enjoyed a bouncy castle and games with paints.

Of particular interest was the “immersive visit” to islands in the Philippines, with virtual reality glasses, to learn about the impact of typhoons and volcanoes and the plans to deal with them through structural improvements and community management.

At the end of the morning, Mass together was an opportunity to give thanks for all the work done throughout those years and for the dedicated lives of so many people who have formed and continue to form part of InteRed. The priest spoke about St Pedro Poveda and his attentive and transforming care for the caves in Guadix.

The party continued with a cocido madrileño, a family Sunday meal with a solidarity flavour.