Together with the Church in saying farewell to Pope Benedict XVI

In a letter from the TA president addressed to Pope Francis, the Teresian Association expressed condolences at the news of the death of Pope Benedict XVI.

“It is with sorrow,” wrote Maite Uribe, “that I would like to express my condolences on behalf of myself and the Teresian Association on the death of Benedict XVI.

We are grateful for his life at the service of the Church and his testimony of faith and trust in God during his pontificate, which he ratified through his resignation.

At this difficult time for the world, I remember in a special way the encyclical Spes Salvi in which he invited all Christians to live in hope that springs from an encounter with God.” 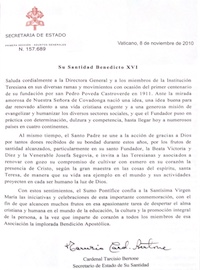 The years of Benedict XVI's pontificate (2005-2013) coincided with our celebration of the centenary of the foundation of the Association (2011).

In November 2010, through the Secretary of State, Cardinal Tarcisio Bertone, we received the pope’s blessing with a cordial, warm message in which he asked that the TA should achieve “much progress in this exciting task of awakening the Christian and human soul in the world of education, culture and the integral development of each person.”

Also on the occasion of the celebration of the first centenary of the foundation of the Association, those who then formed the General Council of the TA and a group of members from the four continents took part in the weekly audience with Benedict XVI in St Peter's Square on 16 May 2011.

Loreto Ballester, then president of the Association, was able to greet the pope at the end of the catechesis and gave him, among other gifts, the first volume of Obras de Pedro Poveda. Creí por eso hablé. That occasion is recorded in the photo below. 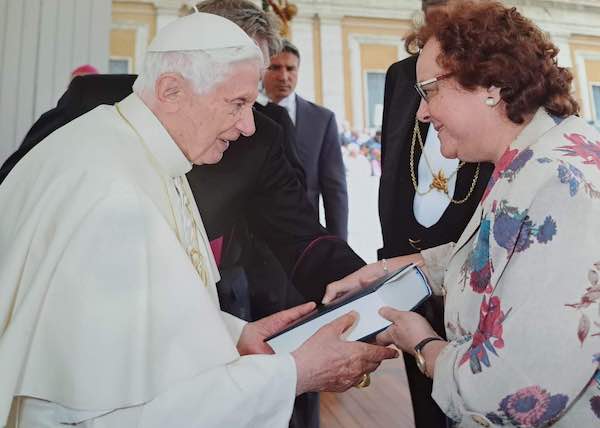 During the audience, when the Association was named, Benedict XVI said, “I congratulate the Teresian Association on the centenary of its foundation and for the service it performs for the Church.”

In his ministry as archbishop of Munich, Joseph Ratzinger met the TA in the university residence of the diocese entrusted to the Association, the Studentinnenheim Theresianum. Former students remember a visit in 1980 (photographs), his familiarity with the works of St Teresa and his interest in learning about Pedro Poveda.

The Association, from every place where it is present, joins the Church in bidding farewell to Pope Benedict XVI by participating in the diocesan funerals and in prayer for his eternal rest.