Thanksgiving for 70 years of presence in the Holy Land

The Teresian Association celebrates 70 years of presence in the Holy Land. During Christmas, a group of pilgrims from Spain, in which there were several TA members, family and friends, joined the events there and received the new year in Jerusalem. 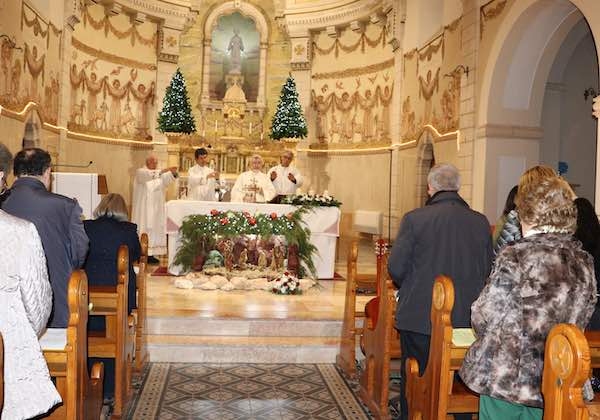 The Teresian Association members in the Holy Land give thanks to the Lord for its enduring presence of seventy years collaborating in education and cultural development activities with Vatican institutions and the Spanish Consulate right from the beginning.

It was in August 1952 when the first Teresians came to Jerusalem to embark on an exploratory mission. They were Angeles Galino, Carola Osete, Delfina Martin, and Maria Pilar Bermejo. The “specific mission” Josefa Segovia entrusted to them was articulated as “being present in the land of the Redemption.” It's also being present with Our Lady of Sorrows at the foot of the Cross and for this purpose, Josefa composed a heartwarming prayer asking for faith, fortitude, and fidelity, which members read each time they visit Calvary (image in the photo).

TA members are engaged in evangelizing ministries as well, such as teaching the Spanish language, professional development of teachers, leadership training of the young and directing services in libraries toward a wholistic approach to life-long learning. Currently, we also offer service to the Church of Jerusalem’s Vicariate for Migrants and Asylum-seekers by cooperating in pastoral ministry, holding Bible study and sharing encounters with migrants, giving catechism and formation sessions as well as preparing young people and young couples to receive the various sacraments.

A long-time friend and strong supporter, Rev. Father Teodoro López, OFM, to have come December of this year 2022 with a group of pilgrims, some of whom are our TA friends to help us celebrate this lovely commemoration.

The platinum celebration was also made memorable by a message from the TA President, Maite Uribe, who, united with our thanksgiving prayer, also echoed, what for us has always been the very reason why the Teresian Association is present here in the land of the redemption: to be with Mary at the foot of the Cross and learn from her, love and fortitude; and to pray for the Work founded by Saint Pedro Poveda. 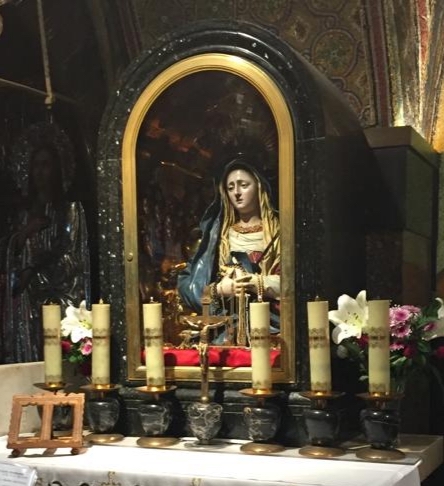 She ended her message with the emotive words from Josefa Segovia taken from her autobiographical reflections after visiting the Holy Land in 1955: “It seems that life, after being in the Holy Land, must have only one guidance, only one path: the path of Jesus.”

Two extraordinary moments marked this celebration: the 29th of December saw us all gathered in the Chapel of the Divine Child of Bethlehem University for a Eucharistic celebration. It was indeed a day of thanksgiving, together with the pilgrims, TA members, their families, along with our Christian friends living in Bethlehem who joined in unison for this memorable grace-filled celebration.

After the Eucharist, for the second moment, everyone was invited to the Pontifical Mission Educational and Cultural Center (PMECC) where a simple cultural presentation was held, followed by socials and refreshments. During the cultural act, both PA and ACIT members described their presence and mission and interacted with those present.

Brother Peter Bray, Vice Chancellor of Bethlehem University also spoke words of appreciation for the Teresian Association members, who, through the years served the university with selfless dedication.

A beautiful power point depicting the genesis of the TA in the Holy Land was projected to the delight of everyone. An interactive moment followed and the final act came as a pleasant surprise: an olive wood depiction of the Nativity scene with the engraved words “In gratitude for 70 years of TA presence in the Holy Land” was distributed among the invitees to serve as a remembrance of this celebration of 70 years.

Saturday, 31st of December was a joy-filled day of prayer and bonding in the “Sede Social” of the Teresian Association. The group of 23 pilgrims, 8 of whom are TA members, had a time of prayer and reflection with thanksgiving for the abundant blessings received and asking for a peace-filled new year. The seriousness of the prayer session broke into a song of thanksgiving, and later some carols were sung joyfully as we partook of hot chocolate, chiffon cakes and a great variety of “turrones”. Taking twelve grapes, one at a time! to the count of 12, added joy and laughter to the already-highly energized group of new year revelers.

As we recap this experience and ponder God’s marvelous works, we recall the words of the Patriarch Emeritus Msgr. Michel Sabbah, when he wrote:

“In this land, you are a part of the mystery of God in it. Try to reflect on this so that you might be able to see God and neighbor and understand the meaning of our presence here…”

The uphill, downhill topography of the Holy Land speaks volumes of how life itself is. At times, darkness clouds our horizon but the Light illumines our path and no matter how hard the climb uphill, the beauty of creation seen on the peak of the mountain, is both refreshing and rewarding. Indeed, the mystery of God that assures us that “His grace is enough for us.”